Sitecore will be closing on Friday, October 7th [duplicate]

Please note that we are Extending the private beta to 10/18.

Creating a successful new web site is hard. Even with a dedicated network of users to draw from, it takes a considerable level of commitment and buy-in from an active community to get the site off the ground.

During the private beta, we only attracted about half the activity of what would normally be considered a viable site. And after reviewing the performance of this site in comparison to the site's we've launched to date, it is evident that we do not have enough momentum and support to get this site off the ground.

Sometimes it is difficult to ascertain why a site didn't work, but with over 5,000 questions for Sitecore on Stack Overflow, perhaps there simply isn't enough demand to support a second site. Whatever the reason, these decisions are always difficult, and I'm sure disappointing to everyone involved.

I thank you for your efforts to get the community this far; unfortunately, we will be closing this site on Friday, October 7th.

Well Robert, we're going to have to agree to disagree on this.

While you don't believe the site can actually make it; I strongly disagree. You're asking for "organic growth" while the site exists in a somewhat closed or restricted environment, not receiving any search engine traffic and relying on members tweeting one question at the time to act as teasers for the site. I feel this is inappropriate or even border-lining unrealistic expectations.

That aside; I also feel a bit blind-sided by the communication (or lack thereof) from your side. No quantifiable metrics were given (you have 2 weeks to reach this target) - something I feel goes directly against the overall spirit of the Stack Exchange. You're given a goal - do this for this privilege, that tag, that medal. Gamification.

As for the information we were given, when the private beta opened. Well you know the email, but here's an exert:

Q: How long will the private beta last? A: Private betas generally last 1-2 weeks while you prepare the site for opening day. Once the site is populated with questions, and its initial scope established, we'll open it up for public beta.

Q: What else? A: The minute the public beta opens, invite your friends. Spread the word via Twitter, blogs, and email far and wide. Hang out on the site answering incoming questions during the first few hours so that newcomers understand what a great experience a working, popular Stack Exchange site can be.

While I can't speak for everyone else; I do know first hand how I read the above. We've been discussing questions (a lot), tags, good questions, grey area questions, no-gos and so on, and trying to reach out into all content areas involving Sitecore. Especially the ones who fall out of scope on StackOverflow which is decidedly meant for programming related questions. And while I don't have an exact count, I'd guess less than 30% of the questions we have would fit into the scope of SO. It might be tolerated there (when no one is looking) but they remain unwanted.

And while we've been discussing all of this, I was (and I know more were) waiting for the 2 weeks to be up, to open up the flood gates. Everyone "at the ready". Ready to reach the targets, crunch the numbers, get the traffic going.

And now you're saying; "Nope. Won't happen.". This is indeed disappointing.

You then proceed to argue; "Stack Overflow is good enough - 5.000 questions" and so on. Well I've been part of that effort for a good 7-8 years now - that comes to less than 1.000 a year on average. We have 110 in 3 weeks in a closed eco system. I could also argue; the very people generating that content on Stack Overflow are the people who would be participating and dedicating their efforts here instead. Or even - feedback I have received over the past 4 weeks while this has been going on - we would attract an even greater audience to this site than SO would ever see - simply because the community is more tightly knit.

I would ask that you reconsider this. The community is right now and over the next 24 hours demonstrating the commitment they have towards this endeavor. They - like me - were waiting for the promised and indicated public beta to really dig in. Don't let that misunderstanding stand in the way of making this a success.

I concur with the other respondants.

The focus should be on quality and not quantity.

Sitecore questions are not going to fall in line with StackOverflow. They aren't just programming questions but also configuration, GUI usage, as well as marketing related questions.

If we get shoved back to StackOverflow our questions will get non-applicable answers or down votes because they aren't programming related.

Sitecore has ~5000 customers and only ~10000 developers. Meaning many organizations have only 1 or 2 real Sitecore resources.

By having a dedicated StackExchange site, we will get conversations between people who actually understand Sitecore and it's proper usage.

In the short time that I have been using this site -- since finding out it even existed at the Symposium -- I have received helpful responses from @MarkCassidy, @PeteNavarra, and @DmytroShevchenko 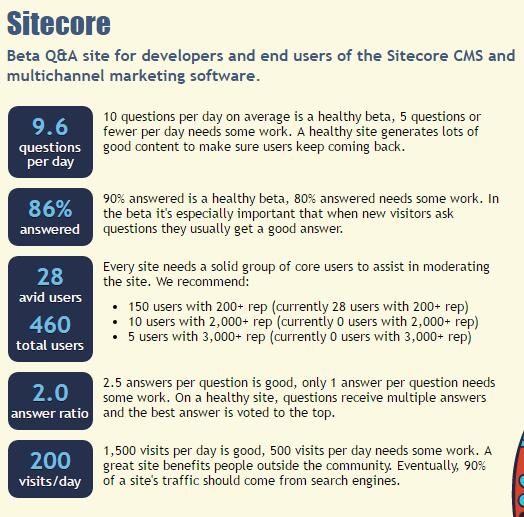 Everyone is doing a really great job improving the stats!

Hopefully before the end of our beta period meet expectations!

In response to the comment-threads above:

With respect, many of these slow starting sites come with promises of crowds arriving just around the corner — so we've tried extending private betas many many many times… and it has never worked.

After launching 200+ sites, these slow launches have been shown to create poor-performing sites 100% of the time. Sites don't suddenly take off by simply ignoring the numbers and opening to the public anyway.

I understand there may be extenuating circumstances, but you simply need more momentum going into launch.

On occasion we have to close these sites that don't have the support we thought they had. There's typically nothing inherently wrong with the subject itself… but when the turnout is this low, you have to determine if the subject still has the support it seemed to have in the proposal process.

If you still believe your site will work, feel free to restart the proposal and prove it. That will give you more time to plan for a successful launch. You will definitely need more of a running start to create something viable. Slow starts have always struggled to maintain any level of traffic even after launch. Always. But rebooting a proposal to get that running start has created some of our most successful launches to date!

If the support is here, your efforts should go quickly the second time around. If not, it wasn't meant to be.

Not the answer you're looking for? Browse other questions tagged discussion .

47
Extending the private beta to 10/18 — NOW OPEN!
2
Closing vs. Deleting Questions
2
Losing Points due to Serial Voting
5
What should the scope of Sitecore Stack Exchange be?
3
Sitecore Community vs Sitecore StackExchange